CATFOOD (April 1976 – December 1976). Claude (Thorax) Chatelain) wished to pursue his musical adventure with me; we invited Alexandre Cadao (whom we had met with ARKHAM at the festival of La Sarraz, and whom I met regularly on our ways to our jobs). Dominique Rao, an organist who no longer wanted to play dance music with his group (EXIL) joined us. CATFOOD’s life was brief but beautiful. Only three concerts (Dizzy, Le Sentier and Cinéma Corso in Renens) with sound engineer Bernard Martinelli. I had announced that
CATFOOD would be my last group because I did not want to start over again from scratch. When Dominique announced his departure with his family for Italy, it was clear that my group adventures would come to an end. It was time to devote myself to my family, although in 1981 TOXIC (brothers Bonin, Stéphane Borel and me) reunited for the concert “Ten Years After” at the Victoria Hotel in Aigle. 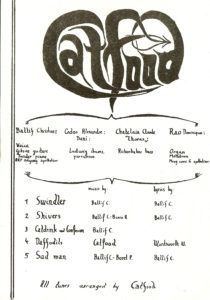