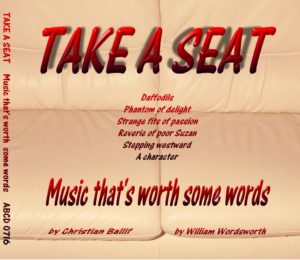 The story of this CD begins in the early 70′ when Christian inherited from her neighbour a book of english poems where he found Daffodils by William Wordsworth.
Touched by the beauty of these words he set the text to music and Daffodils was first played with his former group Catfood.
Then in 2013 he found other Wordsworth’s poems and set them to music.
Halfway between a maxi EP and a mini album we have the pleasure to present you two different versions of the following titles:

Excerpts from the CD:

You can download our single from your favorite platform by entering “music that’s worth some words”.

Recorded at Studio 4ème Réverbère in Boussens, from 2013 to 2015
Mixed by Pierre Borel and Christian Ballif at studio Craving4Sound in Bavois
Mastering by Alain Ernst FreeSon, Villars sous Yens