HEAVY LIGHT (September 1972 – March 1973) The Aigle kids had formed the new band before we got in touch with Daniel Cugnoni, the Flashtrip bassist which had just split up. Jean-Pierre Epiney having signed for a concert in Geneva, we quickly prepared a repertoire based on the songs of Toxic Dream and with the help of Marceline assured the gig. I composed new songs and on December 16th 1972 HEAVY LIGHT in trio gave his first and only concert in Aigle, with WESTWOOD and Q.F.S. Then, without news from Daniel, the group vanished in the air. In our last rehearsal “room”, a henhouse by “Leuleu”, I met Philippe Borel (keyboards) and Stéphane Borel (drums). Together we decided to start the next group: PI. 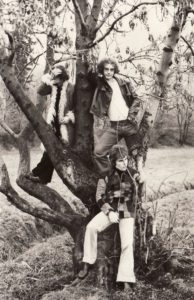