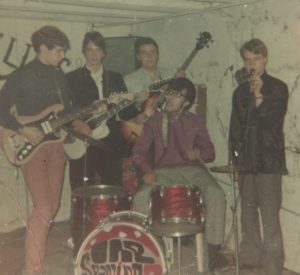 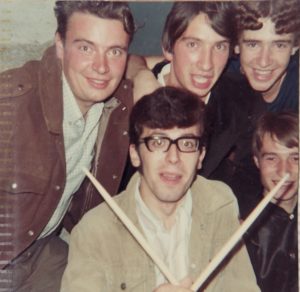 SLAMINA GROUP (February 1968-September 1969. Everything begins at the end of 1966 when, with the guitars of our respective cousins, Roland Bonin and I put for the first time our fingers on an acoustic guitar. Some information gleaned left and right took the role of the “academy”. In February 1968 we made our first investment: each one an EKO guitar (mine pink and Roland’s diamond ). With the help of some sheet music we struggled to give life to some tunes. Roland’s brother Jean-Claude helped us witht the rythm with two sticks, a cardboard, a suitecase and a bucket. It is in an abandoned stable that the trio, augmented by Michel Derameru (drums) would rehearse, Jean-Claude Bonin switching to bass guitar. One day, an other friend, Marcel Dumas, came in and played drums so well that we decided to keep him, Michel Derameru taking over the vocals. On April 13th 1969 the Slamina Group had the opportunity to play at the Radio Romande which stopped in Aigle. Marcel Dumas, in the army at the time, was unavailable so we asked the little brother of another friend Boubou Turrian (12 years old) to take the drums. Total success thanks to our “junior”. On August 23rd and 24th we took part at the Festival of the Golden Guitar in Montmagny. The Drifters won the competition before the Goldfingers, the Inquiets, Satanic Vocation, Magnetic Spoons, Privateers Sponger Brothers and Slamina Group. The slap we got this week-end had consequences and gave a new direction to the group: no-more top ten hits and creation of our own repertoire. Marcel Dumas left the Group and Michel Derameru took up again the drums. TOXIC MUSIC ROBOTS was born. 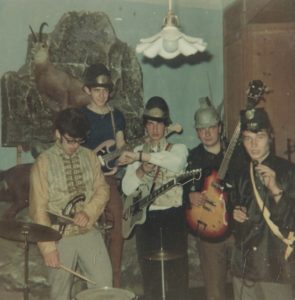