TOXIC MUSIC ROBOTS (October 1969 – May 1971). Change of name, staff, rehearsal room and massive investment in equipment (double bass drums, three 150 watts Park stacks, WEM sound system). Toxic Music Robots play around Aigle and in Valais with varying degrees of success. On April 11, 1970 TMR sell out the Aiglon venue (400 people). On July 4th and 5th (for the schools party) he plays in the Glariers canteen (the 4th in front of 200 people) and the 5th, the municipal band pulls out the plug three times in a row (Toxic Music Robots plays supposedly too loud). It is not really appreciated by the municipality t; on the other hand among the young people it is the triumph. On April 24th, 1971 the group organizes a pop party at the Aiglon. 283 people are support them. On May 15 Michel Derameru informs us he can no longer play the drums because of his back. The group then aks Michel Colombo (formerly Dr. Blues Prescription) to join. 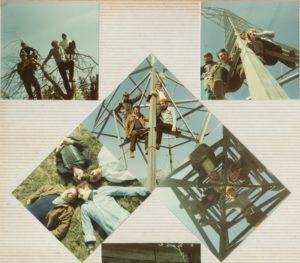